In this article I’d like to discuss two concepts that you might not immediately think to compare. I’ve written previously on keeping your stylesheets modular and also on boundaries in object oriented design, so today I bring the two loosely together.

Object Oriented Programming provides the ability to organise our programs or applications into objects. Objects represent real life things and also computationally important things. They can represent a product, a cart that holds products or the algorithm to find relevant products for a specific user.

Object design is the drawing of boundaries between the logic of our application, and how we can then envisage the interaction of such logic. When designing with objects, we can visually imagine how they interact with each other. This broke with previous ideas of procedural programming where we were forced to think of programs as a continuous operation or rather, one big list of commands to be executed.

We first of all have the idea of an address book. The address book will then have a number of entries. They have entries that may have one or more addresses. Each address could be made of smaller objects such as an address and phone number.

Splitting out our code into objects that represent real world “things” allow us to discuss our code more easily. I can’t imagine what it was like describing a piece of procedural code.

“The ‘addentry’ method of AddressBook isn’t working as expected”

Abstraction is great for making things easier to understand whether you’re reading a class or discussing one with a colleague. Let us leave objects for a moment…

We now find ourselves in the world of user interface design; if you’re a backend developer just imagine a wonderful world of vivid colours and shapes. More usefully, component based design is a concept of modular UI design. It’s a bit like stepping from procedural to object oriented code.

To explore this concept we first must describe the age before. Typically when building a new feature for a website a designer would provide us with a mock up of the web page containing the feature. As a developer I would then begin to build out that page within the app in my development environment to the design provided. This change would then be deployed out to production.

Component based design changes this process, though a designer may still provide a mockup of the page with the feature. The difference is in implementation by the developer. Instead of building the feature directly into the application, the UI of the feature would first be built into a style guide, sometimes known as a pattern library.

The design would be broken down into individual elements. For example, if a feature required a table, the table would be added to the pattern library as an individual module. Below is an example of Mailchimp’s table from their pattern library. 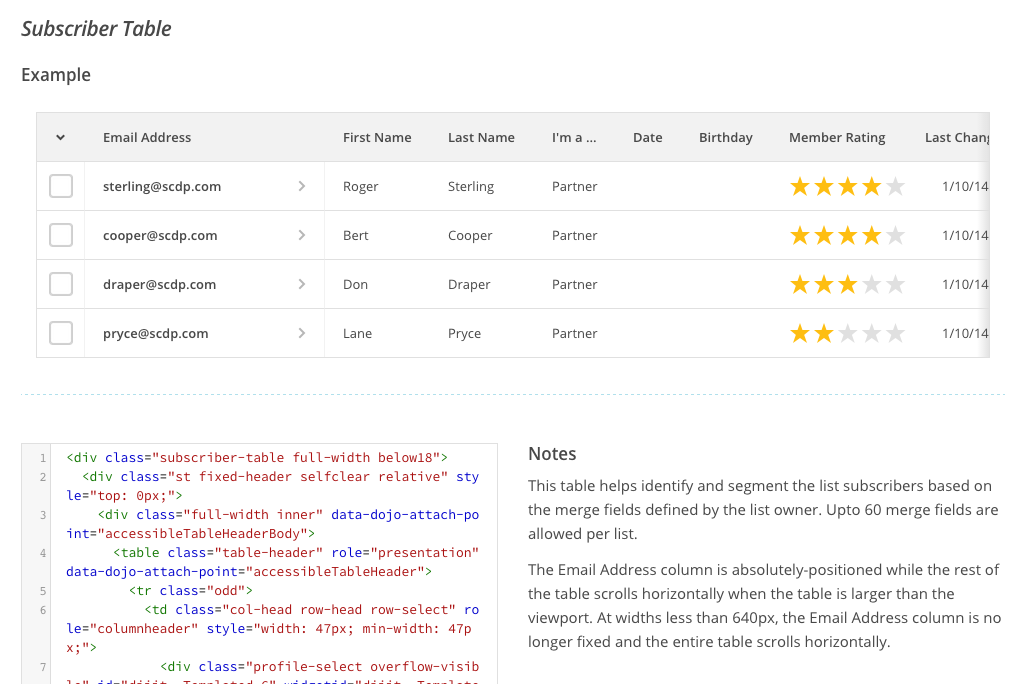 For each visual component in a feature the same process is applied until the entire UI for the feature is documented as a set of modular components. Some teams will then mock up the entire feature in a HTML page using something like pieces for rails. This is essentially a HTML and CSS prototype that can be sent over to the designer to get their take on the implementation. Once all parties are happy, the modules can be used within the application to implement the feature.

Component based design is leaps and bounds ahead of the old page based design since a byproduct is a reusable set of UI elements. The pattern library can be reused in a number of ways to implement new features without necessarily requiring an entire new design. Designers often had a file in Photoshop or Illustrator without their UI widgets. The pattern library is essentially one step closer to implementation in the app since they are made from HTML and CSS.

Very much in vogue at the moment, various conversations and solutions are gaining popularity such as Atomic design, BEM, styleguide driven development and Twitter’s Bootstrap.

Component libraries are themselves a resource and product for clients. By producing a library of components, clients can later chose to build their own pages reusing these resources. Such libraries are becoming a new currency in client relationships for UI and UX. Instead of the old Photoshop .psd we’re selling the building blocks for unimagined structures.

Open source component libraries are popular too. The aforementioned Bootstrap library by Twitter is perhaps the most predominant one finding its way into all kinds of admin interfaces, CMS’s, documentation and open source sites.

One of my own hopes is that in the future we can work even closer with designers to build these libraries of components by iterating on mockups with HTML and CSS. We’d get the first ever mockup from a designer, we’d implement this in HTML and CSS, then extract out into the library and by the time the next feature comes around the designer can consult the pattern library and produce mockups using them. If the designer could maintain such a library within the application, that would be a dream!

There are so many benefits from this way of working, there’s a reason pattern libraries / styleguides are getting more popular.

Being able to describe UI components by name will make conversations with designers and developers much easier just like objects do for code. So too will be pulling these components together into mockups that can be iterated on without implementing any backend code at all.

Having reusable UI modules that can be mixed and matched mean we can reuse components more regularly, and we can save time! Again this is just like OOP.

We get the added benefit of our components being decoupled making the process of updating them less risky since they won’t be leaking into other areas of the design. When we update a component we can simply interate within the pattern library ensuring all the states of the component still look okay. It’s pretty much REPL driven development for UI!

I’m rather excited about all this 🙂

Chief Technology Officer at Made Tech. Talk to me about delivering value through digital and technology, how inclusion and feminism can address a digital skills shortage, and on creating mentoring and coaching cultures.