Open your terminal of choice. Run the following command to bootstrap the required env vars:

Clone our repository down and enter the folder:

Use docker-compose to build the app:

This downloads the images the app needs from the Docker registry and creates the containers to run our app. Go and make a coffee. If you don’t already have the images (which you probably don’t), it will have to pull and build a LOT of stuff, which will take a quite a while. If this stuff hangs for a long time, try Ctrl+C’ing out and using docker-machine restart default to refresh the state of your VM. 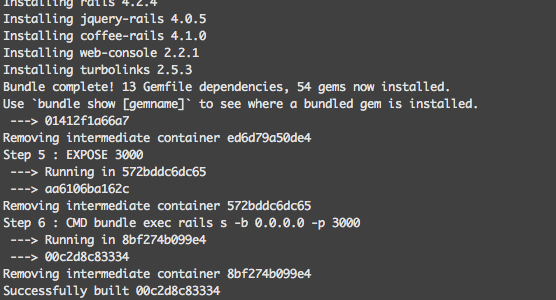 Now it’s time to launch the app. This will pull the db image if you don’t have it already.

Once that’s done, have a look at that pretty cluster output!

NOTE There’s an issue with docker-compose 1.4.1 that means this output might cut out at Attaching to. If you get this issue, run the following command to upgrade docker-compose:

Open a new terminal tab or window. Use the following command (again) to get the env vars you need.

You can now use the following command to get the ip of your docker host:

Then you can visit that URL in the browser on port 3000 to see your app running!

It will tell you that you haven’t created the database yet. So, in your second tab, cd into the same rails-docker-devfolder we’ve been working run the following command.

Now refresh your browser window and you should see the app running! 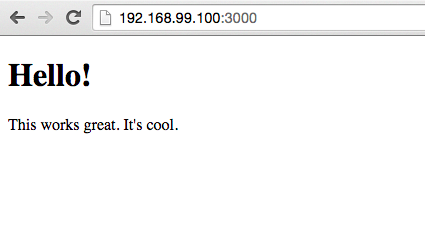 For future convenience, you can then add a line to your /etc/hosts file to access your app more easily. Example:

As we’re developing within Docker containers using docker-compose, we’ll need to use a few different functions instead of our usual ones. I’ve included a few examples below.

It’s that easy! It’s the quickest way I’ve found to set up a fully operational Rails app with database on a fresh laptop. No vagrant, no chef, no complicated build process, just pull and go. Next time we’ll be diving into how this stuff works, and if there’s any way to simplify this process even further. Stay tuned.

Former Software Engineer at Made Tech. Member of the full-stack brat-pack. Enjoys a good blue cheese.