Here at Made Tech we’re big fans of Ruby and use Ruby on Rails for most of our web applications. Over the years we’ve had countless conversations about the pros and cons of Ruby.

In this article, I want to take you through some of these reasons and explain why we think Ruby is a fantastic choice for a modern web application.

It is incredibly difficult to succinctly articulate the differences between programming languages. There are literally thousands of different languages, which have evolved over years and are influenced by one anothers ancestors. You’ve only got to take a look at the fantastic evolution diagram below to see the incredible ecosystem of programming languages available to engineers. 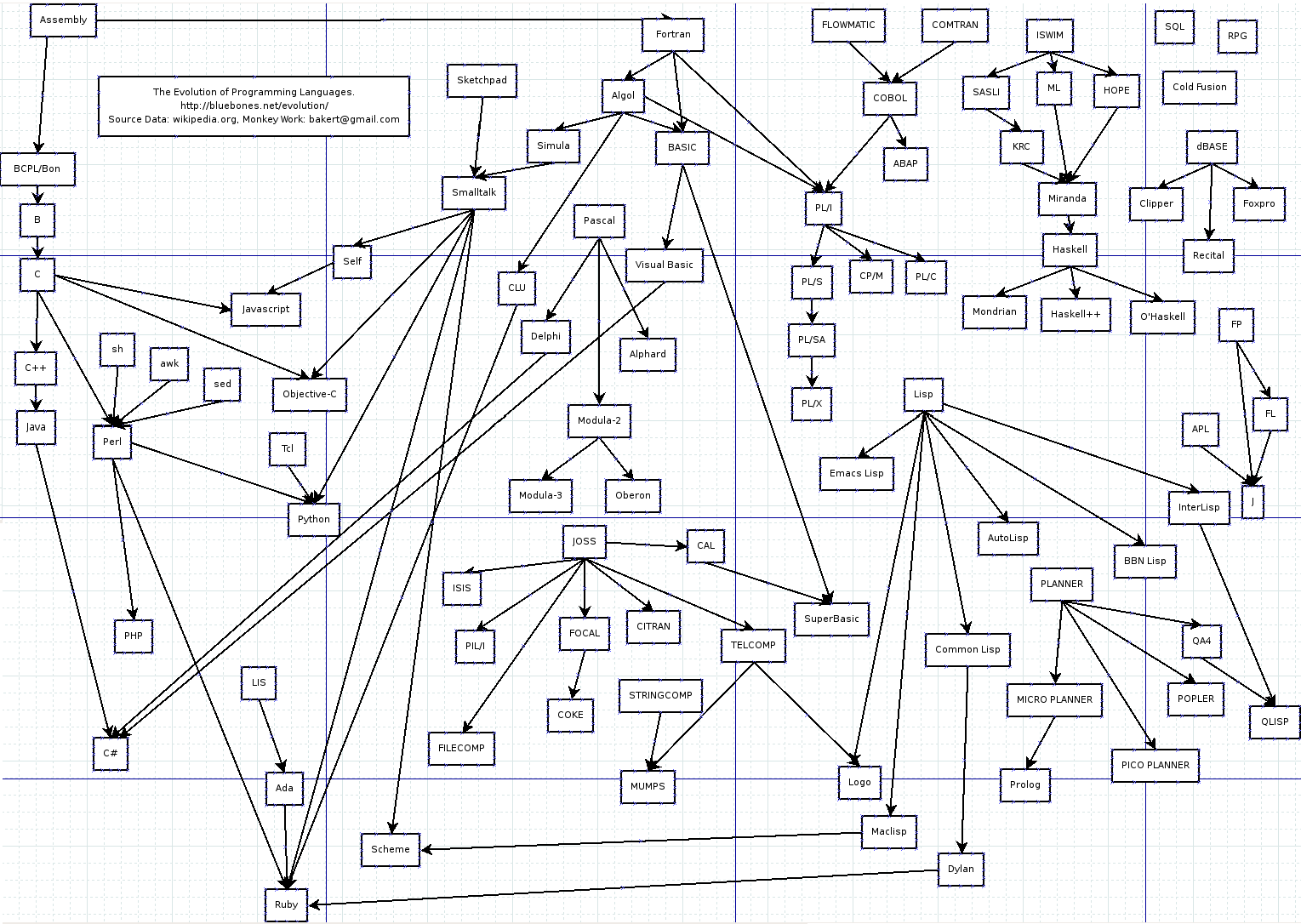 In the past, we’ve seen this result in non-technical customers insisting on using a language they were familiar with (i.e. they had have heard of), rather than selecting the language which was best for the project. In a sense, the language which had the most ‘marketing’, got selected. As an aside, we see this happen frequently when people are selecting CMS systems like Drupal too.

If you’re a non-programmer, then a useful analogy is to think of programming languages as being a little bit like cars; Some cars are slow and clunky, yet incredibly reliable. Some are ugly and difficult to drive, yet parts are cheap and plentiful. Others are fast and exciting, but dangerous to drive and expensive to service.

It wouldn’t make sense to take part in a Formula 1 race whilst driving a Ford Fiesta; and it wouldn’t be cost-effective to commute into the office in a McLaren F1. So, if you want your project to run smoothly, then you need to select the most appropriate programming language for the road ahead.

All of our engineers are Polyglots (proficient at programming in multiple languages), so we feel like we’ve got a good grasp on the pros and cons of many different languages and find Ruby really shines as a general purpose programming language.

It’s worth noting that the software engineering changes rapidly and we expect that within a few years there will be an alternate language / framework, which is more suitable for our needs. (There are a number of candidates on the horizon at the moment, but only time will tell if they prove to be viable long-term options.)

Here’s our take on popular programming languages and their car equivalents:

Benefits of Ruby on Rails?

So why Ruby on Rails? We find Ruby provides us with a combination of the best tooling, better quality code libraries and a more pragmatic approach to software. Plus, the Ruby community tends to have a higher calibre of engineer, who favour responsible development over the gung-ho approach that can be seen in other communities.

Disadvantages of Ruby on Rails?

Of course Rails does have have its disadvantages and it’s only fair that we share those in this post.

There are use-cases for pretty much every programming language referenced and you’ll find advocates of them all. If you are delivering a new application for the web, then we would advise you to develop it in Ruby, Python, NodeJS or GoLang.

The other languages will still get you you from A-B, but at the end of the day, who wants to be seen driving a Fiat Multipla?